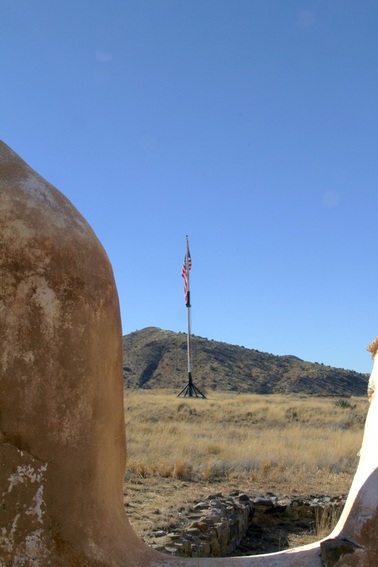 On July 28, 1862, the Volunteer Infantry Soldiers from California (the 5th Infantry) began building Fort Bowie in an effort to protect the area.  Apache Spring, a continuous water source, and Apache Pass which separated the Dos Cabezas (two heads) Mountains and the Chiricahua Mountains. The fort was named for Colonel George Washington Bowie.
The Chiricahua Apaches led by Cochise and next, Geronimo, were the main concern and need for this fort.    This related initially to the Bascom Affair in 1861 and in July of 1862, the Battle of Apache Pass.  From 1862 to 1886, this Fort was the main center for protecting the Pass and the surrounding area.
Cochise and his band of Apaches were at given a 3,000 square mile reservation in Arizona, part of their familiar area, in 1872.
Tom Jeffords, Indian Agent,  attempted to continue in the 'peace planned' by Cochise but after his natural death (Cochise) in 1874, the Apaches grew restless being on the reservation.  Sadly, this caused constant trouble between the settlers and the Indians.                  Eventually, General George Crook and Brig. General Nelson A. Miles, along with soldiers and Apache Scouts, pursued Geronimo and 134 Chiricahuas back into Mexico, until their final surrender. Geronimo surrendered in 1886 after 20 years of constant discourse and disturbance.  In September of 1886, they were brought to Fort Bowie to begin the journey to Florida.  As this ended the Apache Wars, this changed the need for Fort Bowie as a military outpost.  On October 17, 1894, the post closed. *

There is a vast amount of information available regarding the amazing history of Fort Bowie, this is just a quick over-view in the hopes of your visiting the site when in the area.

For an in-depth history of this historic site: Fort Bowie, Arizona, Combat Post of the Southwest, 1858-1894, by Douglas C. McChristian, University of Oklahoma Press
The Walk to Fort Bowie
An easy mile and a half walk to Fort Bowie and the visitor center, where you'll find a museum, items for sale like great books and WATER.  What you'll see along the way... Parke Camp Site, Stage Station, Butterfield Overland Mail Route, Post Cemetery, Chiricahua Apache Indian Agency, Apache Pass Battle Site, An Apache Camp, Apache Spring, Path to the First Fort Bowie.

Unable to make the hike in?
Considered by most to be a "moderate" hike, the just under 200 foot elevation gain, uneven terrain and semi-arid desert environment can prove to be a tad too much for some park visitors. An alternative access, which includes driving along a narrow gravel road and limited parking spaces, is an option for visitors unable to make the hike.  Contact the Park at (520) 847-2221   Link to Park Web-site at bottom of page.
First Fort Bowie
Fort Bowie National Historic Site
Links:
National Park Service (Fort Bowie)
Fort Bowie, Arizona, Combat Post of the Southwest 1858-1894  by Douglas C. McChristian, University of Oklahoma Press
Road Trips  By Bryan Lindenberger   Great B&W pictures of the fort and surrounding area