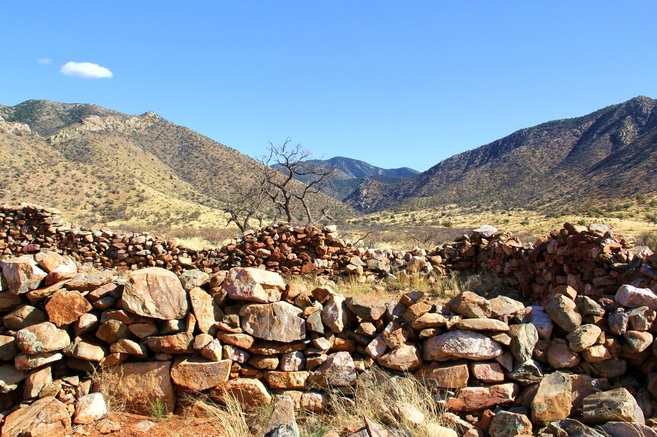 DRAGOON SPRINGS....are located in the northern tip of the Dragoon Mountains about two miles southwest of Dragoon, Arizona.  They were named for the United States Dragoons who camped there in 1856
Barnes, Arizona Place Names


THE DRAGOON SPRINGS STAGE STOP
In July of 1857 The San Antonio and San Diego Mail Line started a mail service from the Pacific Coast to Arizona.  The line stopped here by Dragoon Spring.  The mail line was humorously known as the 'Jackass Mail' as mules were used to pull the coaches and the passengers also traveled on the backs of the mules through the desert!
Congress passed the 'Overland Mail Bill' in 1857 and this was to provide mail service twice a week from San Francisco to Saint Louis.  Along this 2700 mile route, this station was to be one of 200 and construction began in August of 1858.
Prior to the completion of the Stage Stop, three of the Overland Company employees were murdered in September of 1858 by the workers.  (See Murderer at Dragoon Spring Station.)
Dragoon Springs Station was considered a 'swing' station---these stations were used for changing horses or mules.  A 'home' station would include a Station master, a cook and a maintenance men.
Mail service at Dragoon Springs ended in 1861.  At this time the Civil War began, there was increased Indian uprising and the faster Pony Express service started in 1860.
This stage stop had a great impact on the economy of this southwest area; bringing many new settlers and employing a large number of people.
Referenced: The Dragoon Spring Stage Stop, Dragoon, AZ

Three Americans were murdered by Mexicans at Dragoon Springs.  James Burr, James Cunningham and Mr. Lang.  A Mr. St. John of New York barely survived.  The Americans were attacked as they slept.  The three were killed almost instantly when they were attacked with axes.  Mr. St. John was able to defend himself with a pistol and ward them off.  The mail from San Francisco did not come for 4 days and he lay there suffering from his wounds without food or water.  These men were employed by the mail company.  It was believed that the Mexicans had planned to rob the stations as they took property away with them.
The Butterfield Overland Mail by Waterman L. Ormsby


[  ON  April 7, 1860, The Chokonens stole stock from the Dragoon Springs Stage Station.  Samuel Cozzens reportedly there at the time of the raid, stated that the Americans suspected Cochise.  The following day, Cozzens spoke to Cochise of the incident and the Chief just gave an ambiguous reply that led Cozzens to believe that Cochise had led the raid, which he probably had.
Pg. 135   Cochise, Chiricahua Apache Chief by Edwin R. Sweeney

ON  May 5, 1862, Cochise and Francisco jumped the rebels at Dragoon Springs.  They killed four men and ran off twenty-five horses and thirty mules.
Pg. 194  Cochise, Chiricahua Apache Chief by Edwin R. Sweeney ]

IN  MAY OF 1862  a group of Confederates were rounding up cattle by the abandoned Butterfield Overland Mail Station and were in a skirmish with a group of Apache Indians.  This group of soldiers were from Company A, Governor John R. Baylor's Regiment of Arizona Rangers, under the command of Captain Sherod Hunter.  The command of Captain Hunter was based in Tucson.  They were working against Union forces from California.  During this battle, Hunter lost four of his men.  The Apaches took 30 mules and 25 horses.  It was not known if they lost any warriors.
The Confederates represented an unwelcome threat to the Apache Homeland.  The famous Apache leader, Cochise, along with the Chokonen band of the Chiricahua Apache, wre living in the Dragoon Mountains and the nearby Dos Cabezas, Chiricahua and the Peloncillo Mountains.
The relationship with the Apache was already hostile.  Then in 1861 there was the Bascom Affair.  U. S. Army officer, Lt. Bascom, falsely accused Cochise's group of kidnapping a child.  Due to this, any soldier was considered an enemy to the Apache.
The Confederates that died in this battle in 1862 are buried by the stone wall of the Butterfield Overland Mail Station.  Sergeant Samuel Ford and Ricardo, who was a Hispanic cattle drover, have their graves marked.  The other two burial mounds are not marked.  One may hold the remains of Captain John Donaldson.  The fourth burial mound remains unknown.  These are the only Confederate soldiers that have been known to be killed in battle within the boundaries of modern-day Arizona.
Reference:  Dragoon Spring Stage Stop, Dragoon Springs, Dragoon, Arizona

COCHISE AND GENERAL HOWARD had met in the Stronghold but to make the agreement more formal had agreed to meet the following day at Dragoon Springs.  The terms of the treaty were simple.  Howard set aside the reservation Cochise wanted, saying later that 'it was not the one I preferred but the only one I could get the Indians to agree to.' He also promised that the government would furnish the usual supplies of food and clothing.  Finally, he agreed 'that they should have Thomas J. Jeffords as their agent.'  The latter was a moot point, since Howard had appointed him special agent the previous month.  In return, 'Cochise and his captains promised to abstain from all unlawful acts they commit . . . . what they call war.'  And Cochise pledged to 'keep the road in all that vicinity open.'
After these conditions were agreed to, Cochise declared that 'hereafter the white man and the Indian are to drink the same water, eat the same bread and be at peace.'  To dispel his fears, Cochise insisted that the officers from Fort Bowie be present at the formal parley to be held the next day . . . . which was to be held at DRAGOON SPRINGS STATION .
P. 363  Cochise, Chiricahua Apache Chief by Edwin R. Sweeney


CAPTAIN JOSEPH THEODORE HASKELL, LIEUTENANT CHARLES BIRD, COLONEL [CAPTAIN] S. S. SUMNER, AND DR. EDWARD ORR arrived at Dragoon Springs shortly before the conference was to begin.  The council began after formal introductions were made.  There were about 50 present with COCHISE, his captains and his warriors.  Cochise related all the faults that he felt were had against his people and then stated that he wanted peace in his old age; but that if the white an would not let him do it; he would go away from here and fight him.  Cochise and one of his captains spoke for nearly three hours before the boundaries of the treaty were discussed.  Cochise promised to keep his Indians on the reservation and protect the Tucson Road.
When the conference concluded around 4 PM Howard and the Chief had one final meeting and Cochise said good-bye to him English.
The Boundaries that were confirmed were:  Beginning at Dragoon Springs, near Dragoon Pass, and running thence northeasterly, touching the north base of the Chiricahua Mountains to a point on the summing of Peloncillo Mountains or Steins Peak range, thence southeasterly along said range through Steins Peak to the New Mexico boundary; thence due south to the Mexican boundary, thence westerly along said boundary fifty-five miles; thence northerly following substantially the western base of the Dragoon Mountains to the place of the beginning.'
P.  363-365  Cochise, Chiricahua Apache Chief by Edwin R. Sweeney

'I had previously been informed to listen closely as the Indians disliked seeing things written down; they thought there was bad medicine in it.  At the end of the council this was the result;  The Indians should have a reservation a few miles from Fort Bowie, known as the Chiricahua Reservation, that Cochise's Indians were to be gathered there with enough room for hunting and that Tom Jeffords would be their Agent.'
Cochise , in return, would keep his followers on his reservation, preventing attacks on the white by his own Indians or others on the stage road and in the are surrounding his people.
General Howard had hoped to get these people on a reservation in New Mexico near Canada Alamosa, far away from where they had caused such mayhem, but they would not agree to that.  The Indians felt an attachment to the land they had known for so long and they were reluctantly allowed to remain.
A final council was to be held at Dragoon Springs.  The General invited Colonel [Captain] S. S. Sumner, who was the commander of the troops at Fort Bowie to attend the final council, with all his officers at  Dragoon Springs.  Brig. Gen Joseph T. Haskell, a captain in 1872, was a witness to the treaty at Dragoon Springs.
The officers arrived in full uniform.  The Indians had their paint and feathers.  All were introduced with great formality.  They spoke of peace, made their agreements.  It appeared as if they were all satisfied with the agreement.
Making Peace with Cochise, The 1872 Journal of Captain Joseph Alton Sladen; Edited by Edwin R. Sweeney 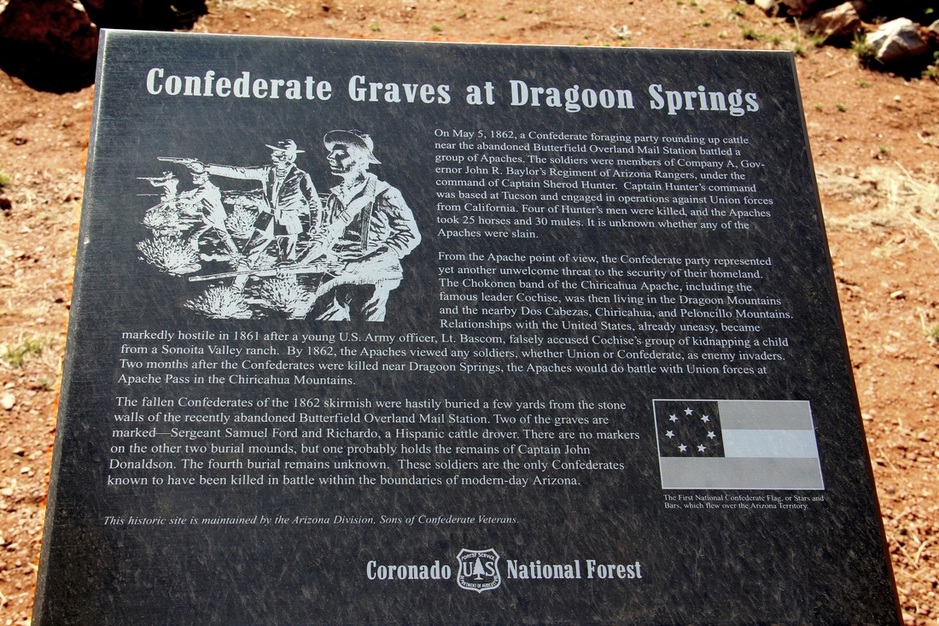 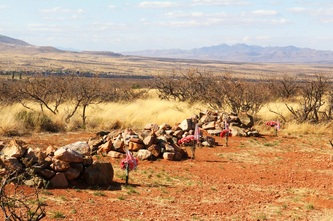 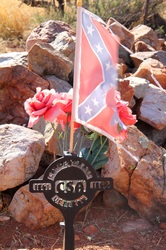 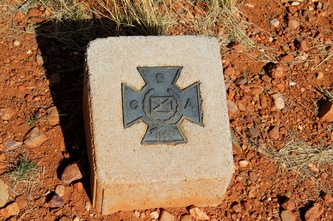 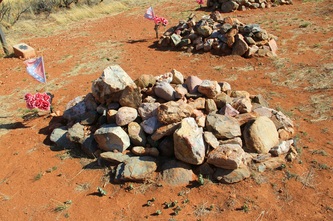 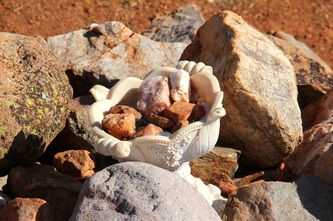 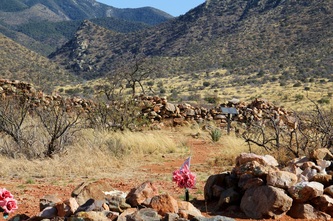 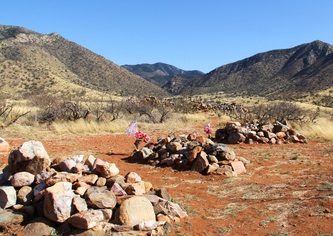 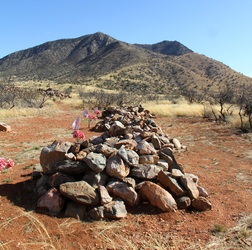 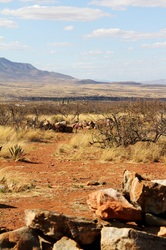 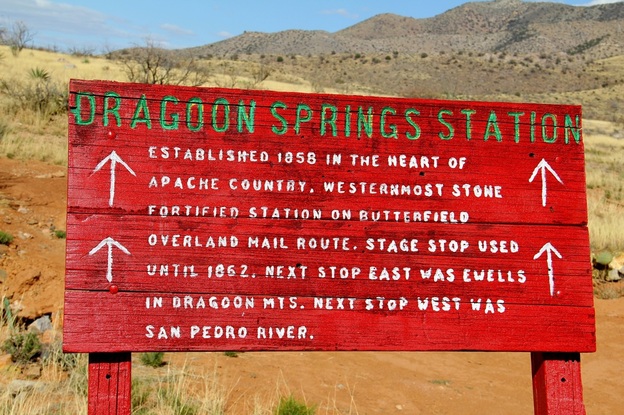 Take exit 318 off interstate 10 and turn south onto Dragoon Road.  Cross the RR tracks in the town of Dragoon and take the dirt road to the right (N. Old Ranch Road). After about 2.6 miles turn left at the sign marking the Springs and Station, Dragoon Station is just over a mile ahead.

So far all you needed were tires that can hold up to a road of stone and rock but... if you want to drive the next mile to the spring you'll need some extra clearance.  I was there several times with a jeep and never needed 4x4.
******************************
The Amerind Foundation is a great museum for anyone interested the the local history.  Look for it  on your way back, just a mile before the interstate.