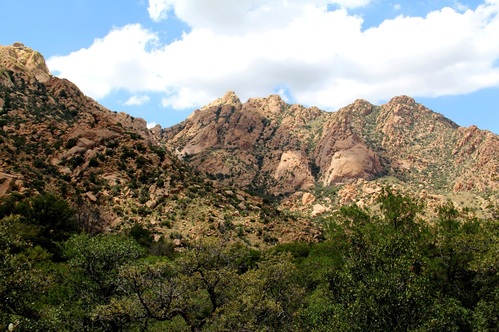 
This lovely area has a campground that accommodates RV's up to 30' in length.  There are a total of eleven sites.  Nine for tents or RV's and 2 group sites.  Each site has a grill and picnic table on a cement pad.  There are handicap accessible restrooms.    This is a fee area with a maximum stay of 14 days.


There is an interpretive nature trail, as well as the Trail-head for Cochise Indian Trail #279.  This Trail will take you over the mountains to the West Stronghold.  There are benches strategically located to take in the views and relax.


Please take the time to refer to the 'Leave No Trace' information.

For the birders' among us, please check out this site, the  'Cochise Stronghold Bird List,'  for more information: 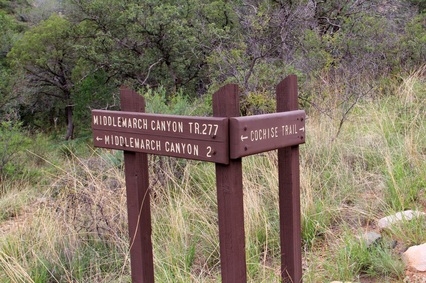 The trail is about 5 miles in distance; with an approximate elevation gain of 1,100' with a few switchbacks at the steepest part of the trail.  If you don't want to hike over and back; leave a car at the opposite trail-head or have someone pick you up!

The West trail-head will require 4 wheel-drive.  Directions to the trail-head are below, under GETTING THERE.

When starting the hike at the East trail-head, after about one mile, is the Cochise Springs.  Travel an additional mile and you come to Half Moon Tank, which is a small concrete dam.  A mile further on, or about three miles from the trail-head is the Stronghold Divide.  (you're over half-way at this point!)

The trail is marked quite well with mile markers, etc.  Scenery along the trail is the  Stronghold at its best....with lots of plant and animal life and unique rock formations.   Average hike time is approximately four hours.  This will vary greatly depending on how much time spent off-trail, taking pictures, etc.  This goes without saying, with the Arizona sun,  PACK PLENTY OF WATER!  Dogs are welcome here when leashed. 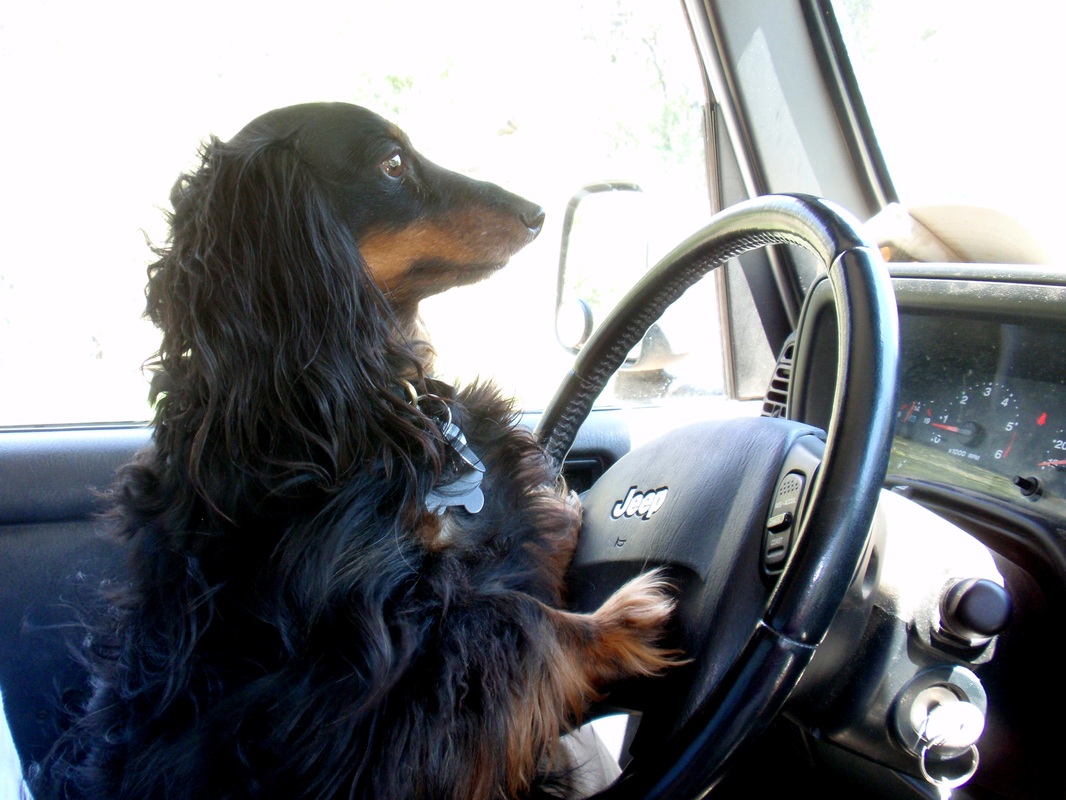 Dogs are welcome... but must be accompanied by a human and be leashed! 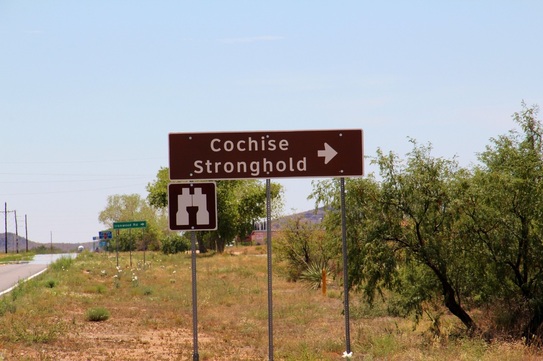 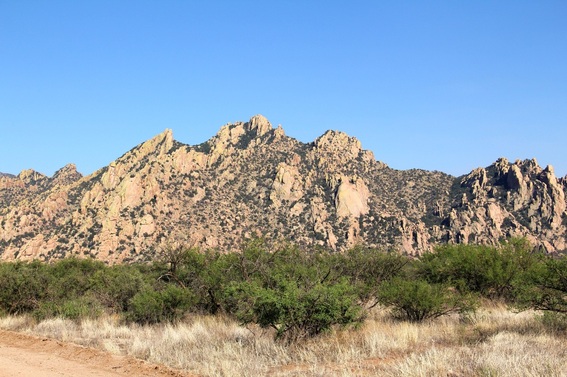 
The Cochise Stronghold in the Dragoon Mountains was once the refuge of the great Chiricahua Apache Chief, Cochise.  This rugged area was home for 250 warriors and up to a total of 1000 in the  tribe for up to 15 years.  Being able to observe the valley below form the towering spires of rock, they could spot their enemies and attack!

Cochise, a master strategist and leader, was never conquered in battle.  For a decade Cochise and his band of warriors tormented the mining camps, passing stagecoaches and peaceful ranchers in the area.  After Cochise made peace with General O. O. Howard, he resided on the Chiricahua Reservation until his death.  Cochise was secretly buried in the Stronghold and Thomas J. Jeffords was the only Anglo person to know of his resting place.


'In 1872, Howard brought a similar courage and sense of commitment to the American West when he was dispatched by the Grant administration to meet with the Chiricahua Apache leader Cochise and bring an end to his decade-long guerilla war against American settlers. Travelling almost alone, Howard entered the Apache chief's stronghold and secured a peace agreement by promising him a reservation of his own choosing. Other generals and public officials condemned what they saw as the overly generous terms of this agreement, but Howard's promise was upheld by an executive order which set aside nearly the whole southeastern corner of the Arizona Territory as a Chiricahua reservation on which Cochise and his people could live with little meddling from the army.'                                   http://www.pbs.org/weta/thewest/people/d_h/howard.htm


Along the northern tip of the Dragoon Mountains, a portion of the Butterfield Stage Line ran from Tucson to Fort Bowie.
Sadly, this was a favorite area for Cochise and he killed numerous drivers in just over a year's time. The 'Dragoon Springs' station was established by the Butterfield Stage Line in 1858.  It was named 'Dragoon Springs' in reference to the natural spring nearby. 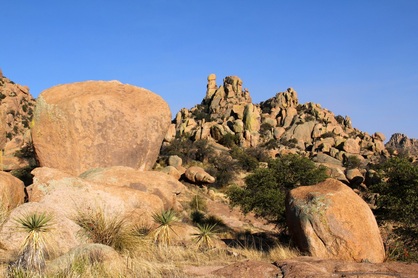 Council Rocks in the Cochise Stronghold
General O. O. Howard referred to Cochise as the 'most manly of all chiefs!'  Cochise and Howard most likely met on the western slopes of the Dragoon Mountains at a place commonly known as 'Council Rocks.'  This treaty was simple...promising that the government would supply food and clothing and setting aside the reservation that Cochise requested.  It was also agreed that Thomas J. Jeffords would act as their agent.  Cochise agreed to 'keep the road in that area open' and to refrain from all unlawful acts, in other words......'WAR!'

Cochise died in 1874.  Two years later, in June of 1876, the government relocated Cochise's band to San Carlos per the Apache Concentration Policy. 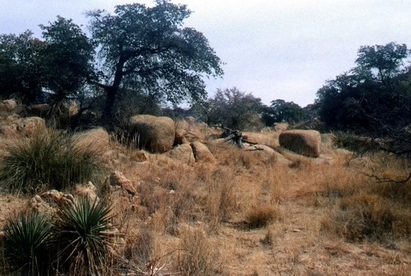 Peace treaty site, south of the mouth of the West Stronghold, 2000.
On October 10, 1872, Cochise and his Apaches held council to discuss Howard's proposal. " The meeting took place on 'a little nook some fifty yards up the mountain' just south of the mouth of Cochise's West Stronghold Canyon," Howard reported.  Billy Fourr had his homestead a few miles away from the canyon and was shown the site by Tom Jeffords.  Robert Forbes was taken there by Fourr and took a photo of the peace treaty site.  (This original photo is shown on page 90 of 'Making Peace with Cochise --The 1872 Journal of Captain Joseph Alton Sladen;' Edited by Edwin R. Sweeney with the Foreword by Frank J. Sladen, Jr.; this photo is courtesy of the Arizona Historical Society, Tucson, AZ.  AHS photo 5558.)  The site remains untouched and is the same today and is exactly where described by Howard.    Tom Jeffords referred to this as the 'Big Prayer Meeting on the Big Rocks,'  when telling John Rockfellow about it.  'In front of it, probably a mile away, looking westward, was a large rocky knoll,' Howard wrote.  Knob Hill or Treaty Peak (locally referred to as Treaty Hill), Jeffords and Salden were asked by Cochise to place a white flag on the peak.  (Local story-line is that Cochise's son, Naiche, ran to the top of the hill and
placed the white flag to signify their agreement.) 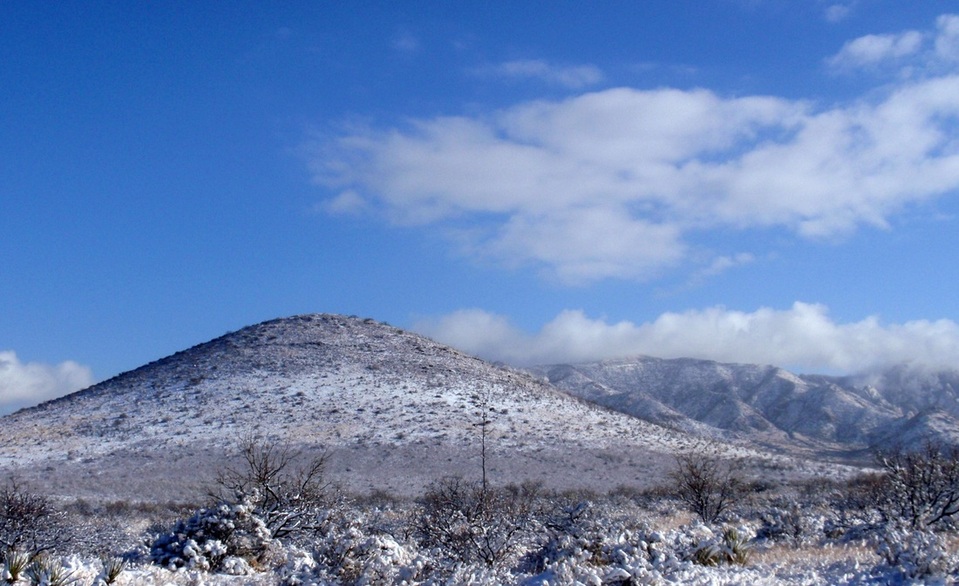 To indicate that peace was made with Cochise, a white flag was placed atop Treaty Peak, also known as Knob Hill....locally known as Treaty Hill! 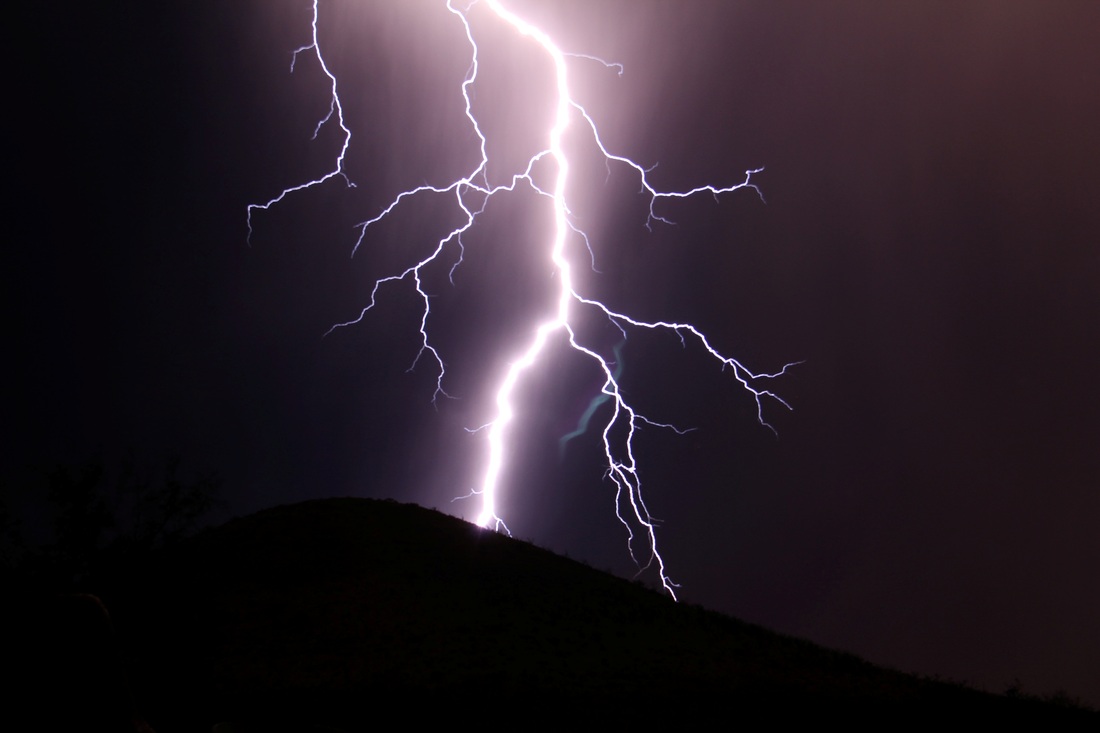 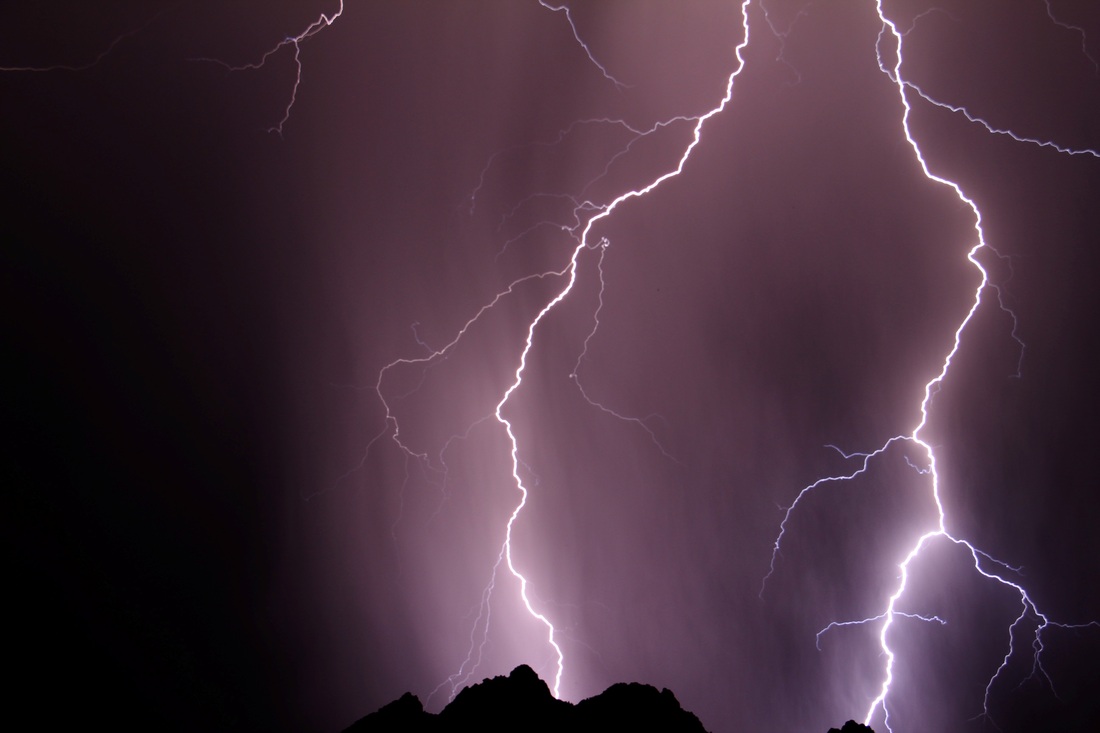 Lightning over the Dragoon Mountains
Today, Cochise Stronghold and Council Rocks, part of the Coronado National Forest in the beautiful Dragoon Mountains, is a great place to visit.  Council Rocks has an elevation of over 4900' making for great summer temps and even a little snow in winter!  Whether you just want to sit and relax, take in the sights and history, hike the hundreds of trails, rock climb or go camping, it's an easy destination with something for everyone!!
white house
White House Ruins
* Horse Ranch
* Tweed's Ranch 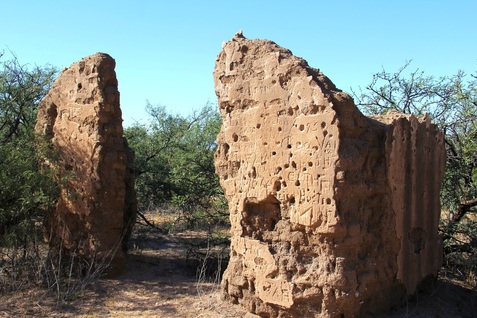 Adobe wall White House Ruins
White House Ruins in the Dragoon Mountains is just 3/10 mile past  the 687 K turn off for Council Rocks on Forest Road 687 coming from Middle March Road.  The Ruins are on private property, but some of the adobe walls are visible from the locked gate.
I have no research telling how it came to be known as the White House, but a coat of white wash seems like a simple answer.  Horse Ranch and Tweed’s Ranch are two more names found on older maps.  (Boss Tweed?  No.)  It seems to have been just that, a horse ranch, until the Apaches made life a little too exciting. The Apaches were relocated from the reservation in the Stronghold to the San Carlos Reservation in 1876 and that, as far as I can tell, was the last time the ranch was in use.
Access from Saint David over Horse Ranch Road is now blocked, so I’ve found coming in off Middle March Road to be the best route into the Stronghold.
See "Getting There " below for directions. 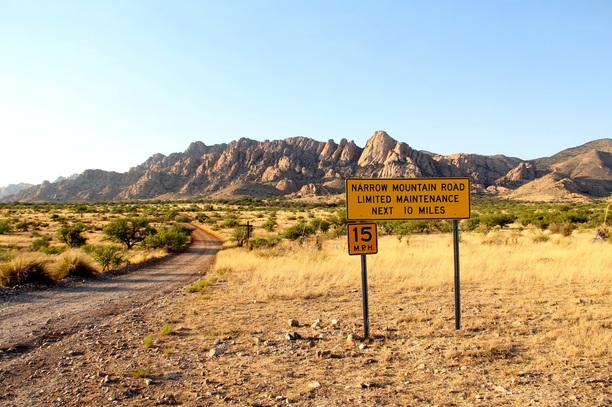