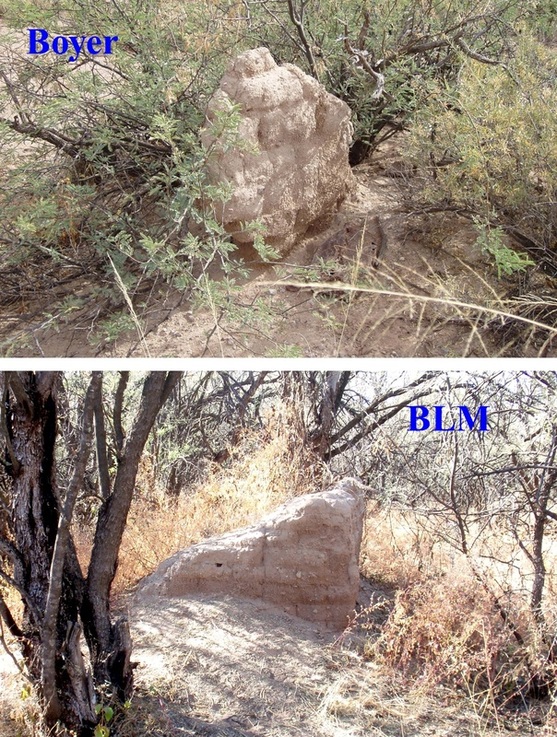 
On March 15, 1881, the Kinnear and Company coach had passengers and Wells Fargo & Co.'s cargo on board.  While traveling up an incline, approximately 200 yards this side of Drew's Station and about a mile the other side of Contention City  * . . . A man stepped out and yelled, 'Hold!'  Then a group of about eight men appeared.  A shot, and then another, was heard coming from the same side of the road.  'Bud' Philpott, the driver, fell between the wheelers; he still had the reins in his hands.  The horses ran wildly for almost a mile before they stopped.  At this time it was realized that a passenger, Peter Roerig, had been mortally wounded.


It is believed that this was an attempted robbery of the Wells Fargo & Co.'s cache.  Yet the robbers gained nothing by this murderous task.


If the above, underlined, bold statement is true; then the robbery HAD to have taken place Between Contention City and Drew's Station.

A TALE OF TWO DREW'S STATIONS

Going to Drew's Station isn't as easy as you may think.  First, you have to decide which one!  May I suggest going to both?  One Station was a Glenn Boyer find.  The other has been called the TTR/Sosa site, but really is the old BLM site from some years back when BLM took descendants of the family to this site.


It would be nice to know which one was the site of the real Drew's Station, so you may want to do a little research on your own.


The blog Tombstone History Discussion Forum 'TTR' at  http://disc.yourwebapps.com/Indices/39627.html#143440 has been having a good debate for the most part...with the exception of one name-calling know-it-all who I refer to as 'Kokopelli,' as he is always blowing his own horn.  Post, if you dare!  I don't think anyone takes him seriously.  But be warned.  If you can read a map, you may be called a Luckless Butt-head.  Most of the debate centers around which eye witness is the one to have the story correct.  You could start with the little girl, Cora Drew, about nine years old at the time, and hang your hat with her recollection years after the fact.  In this way, you will never have to get off your butt and really think about it...or do the math...or look at a map! Plus you save yourself from being hood-winked with the newfangled satellite imagery stuff!  You just lie about the distance to the river from the site.  Nobody really looks that hard to see if you're lying or just a Butt-head!

Seriously, in the time they spend with a back and forth, going nowhere, we could see both stations and a lot more!


If you are still wondering which site it is.  Think about all the witnesses;  all good people and just as poor at remembering what they saw as we are today.  That's why this thing is going nowhere.  The truth is in the distance from Drew's Station to the known site of Contention. The two Drew sites are almost a mile apart.  So the real questions becomes, what is the mileage to Drew's Station from Contention?


Remember, two people lost their lives there in a botched stage hold-up that netted the robbers nothing.  Everyone agrees it happened in a wash near the station so have a good look at each wash nearest the station at both sites.


Below are two Google Earth Maps showing the two sites.  If you are following the story of the robbery, you'll remember the wash is   BELOW  Drew's Station.  Some are confused by the use of 'BELOW;' they seem to think it changes with the direction traveled.  Below  IS  always  SOUTH !!  South Carolina is below North Carolina regardless of your direction of travel.  Same for the wash below Drew's Station.  It is south of the Station or below the Station.  You may wonder why this matters; both the BLM Site (that TTR and Nancy Sosa rediscovered)  and the Boyer site have the robbery in the wash below the station.  The point is that...
if they all agree on this...how could the robbery happen after changing horses at Drew's?  The Stage was going north or up to Benson from Tombstone and entered the wash before it made Drew's Station no matter which one you think is the real Drew's.  So to recap, unless you 'don't let the facts get in your way' or have a third site in mind, the robbery came before Drew's by 200 to 300 years.

You might be thinking by now why do I link you over to the Tombstone History Discussion Form if it's full of garbage like what's above...It's really not, there are some folks posting that know what they're talking about and can make a point so clear that they never have to go so low as to start name calling.
Here is just what I'm talking about and why BJ's is a good place for info if you just sort out the one or two Kokopelli
http://disc.yourwebapps.com/discussion.cgi?disc=39627;article=163487;title=B.J.%27s%20%20Tombstone%20History%20Discussion%20Form

Still the one thing that matters most, is the distance from Contention City to Drew's Station. Keeping in mind that the two sites are almost a mile apart, this could be the one big difference between the two that tells the true story of the One True Drew's Station. 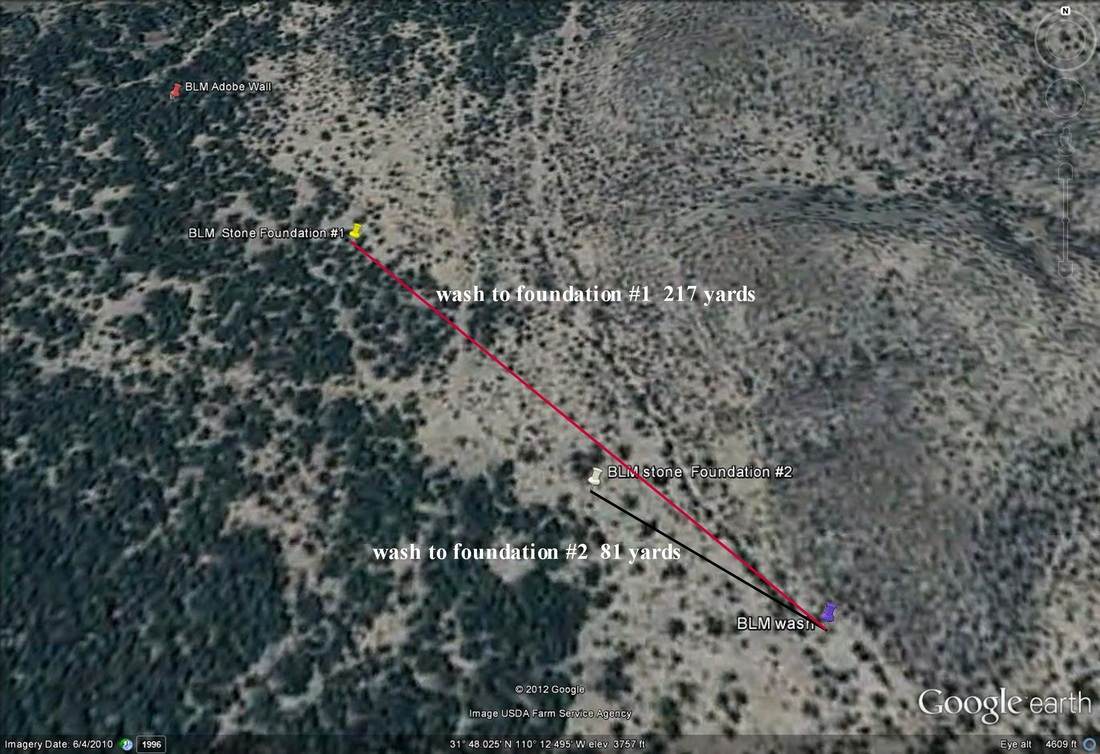 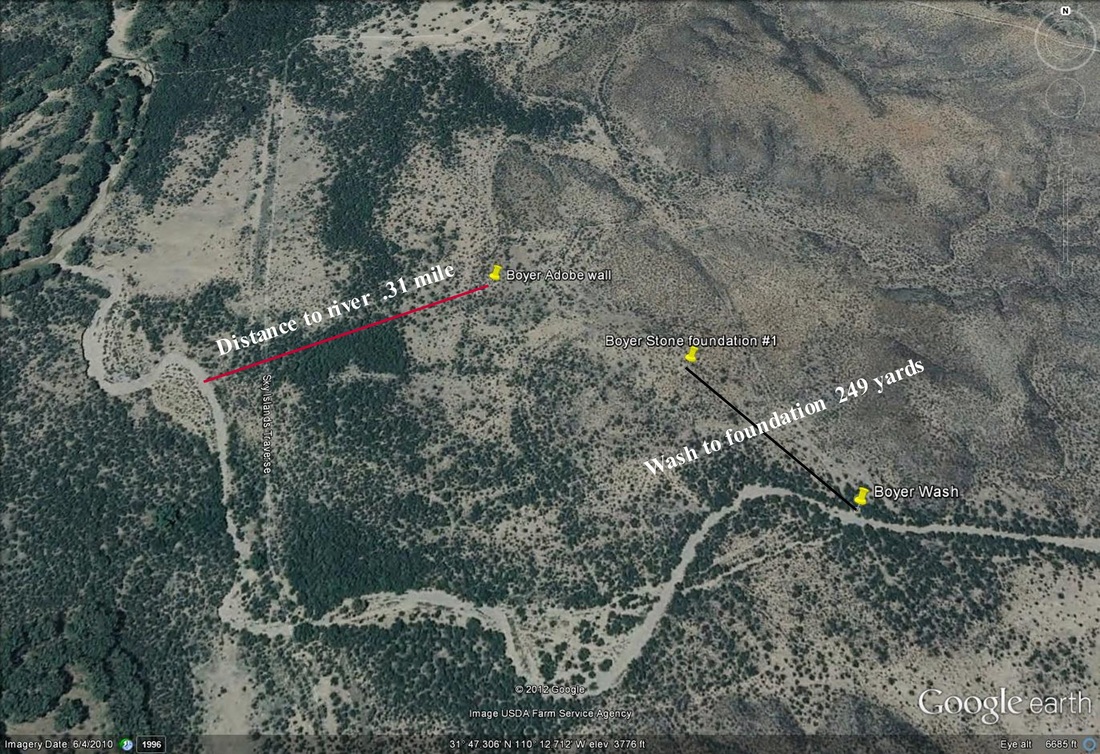 Keeping in mind that the two sites are almost a mile apart... 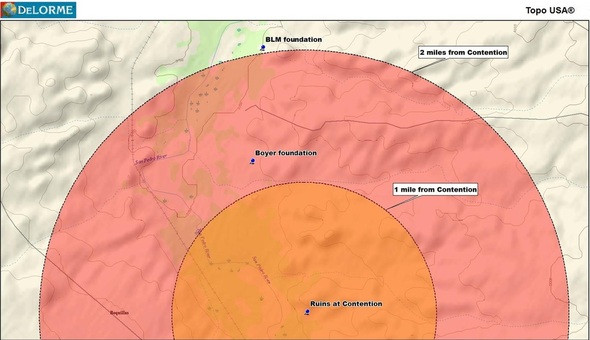 about a mile the other side of Contention City.

'Approximately 200 yards this side of Drew's Station and about a mile the other side of Contention City.'

From telegrams received from Benson, at the Epitaph Office, the following particulars of the affair were gathered:

Note it says telegrams, not one, but 'more than one!'

'As the stage was going up a small incline, about two hundred yards this side of Drew's Station and about a mile the other side of Contention City, a man stepped into the road...'


Another mile away (so over 2 miles from Contention City) is another wash and with a quick re-write we just go DOWN NORTH, circle the stage so it is UP SOUTH, and then the robbery happens after they change horses, but in the wash they went through before they got there.


Or, maybe, Boyer got this one right.

The three pictures below are courtesy of Sulphur Springs Historical Society 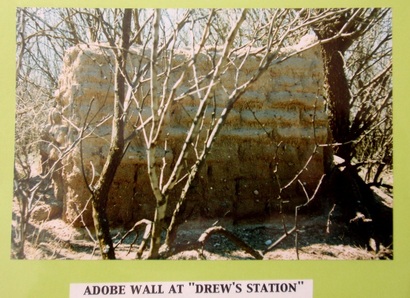 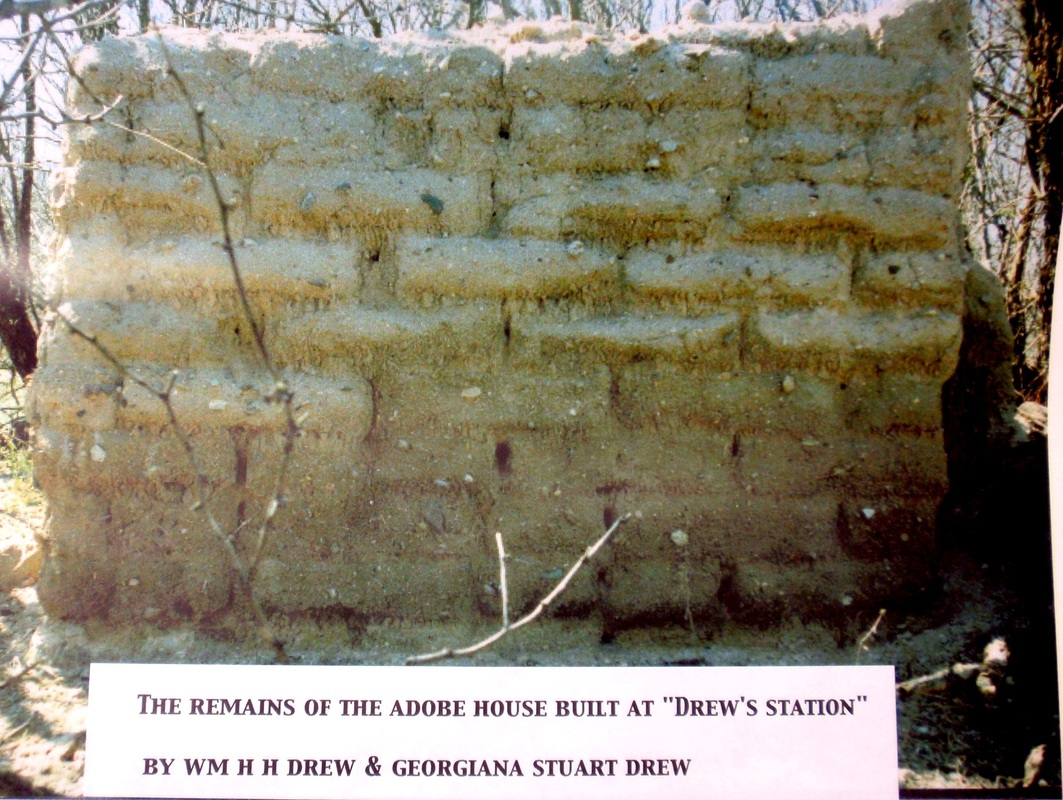 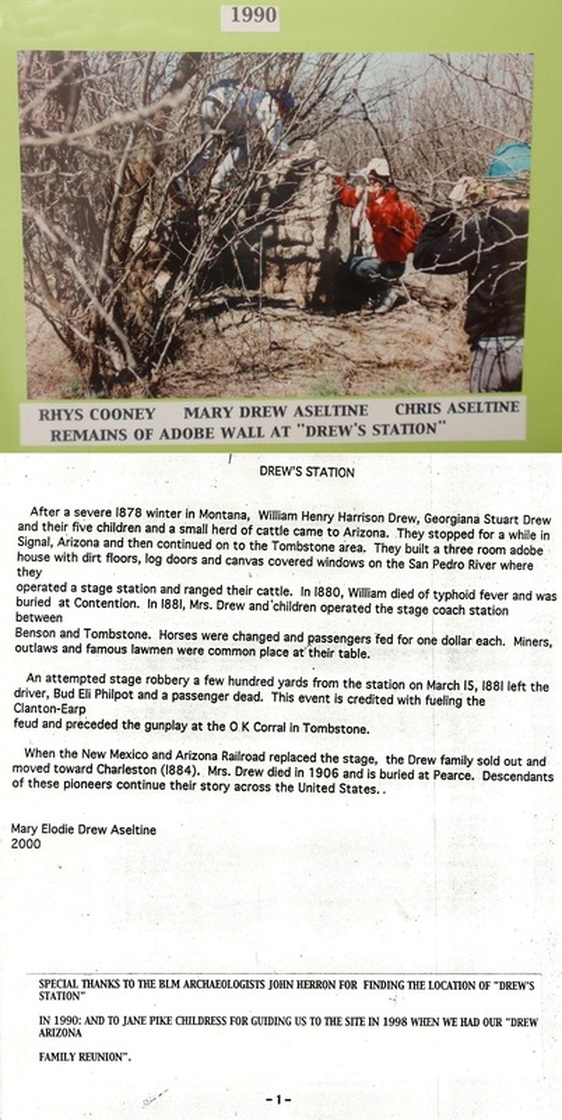 Not historically accurate ? Well that’s not Drew’s…so
If you made the trip to both sites and took along the story of the robbery,  you already know what took 40 years to rediscover... Boyer was right.  The  BLM/Sosa site is wrong on many levels.  Mostly location...well in fact that’s  really it, isn’t it?  But if you spent some time there, you had to notice the  wash is wrong, you have to go out of your way to run through it because it’s too  far east.   Just walk up the road like you’re going to any one of the three  ruins at that site and ask, how could anyone end up in that wash?  Make sure you’re looking at the wash and not the ditch. The wash runs  east and west and is southeast of the site while the ditch runs north and south  and is east of the site.  Stand in the wash at the spot in the picture from TTR, now look over to the ruins and you will have a “what the heck were they thinking moment”.

I believe Doug Hocking’s no nonsense posts on BJ’s Tombstone History Forum was the real driving force in bringing the site back to where it always was. His well-thought-out posts were hard, if not impossible, to  dispute.  His approach from the very beginning was the RIGHT SITE not the RIGHT  PERSON.

The BLM site is there, along with another site just south  of the Drew’s robbery location.  There is a lot to research! With the Drew’s  site back as an established mark, it's a good starting point.
For the people who want to see both sites, look at the Topo map and get some GPS coordinates.  The following are the directions to both sites : 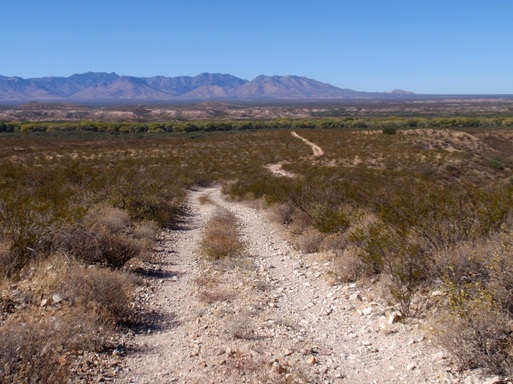 Turn off route 80 between mile markers 309 and 310 and head south/west.
Stay on this road for 2.9 miles and you'll come to a BLM (Bureau of Lock Management) gate with lots of space to park.  It's posted NO FIREARMS  so practice your hiding skills.  The Boyer site is off to the left and the BLM site is down the road and to the right.  Neither is a bad hike but keep checking the GPS. There are many cow and human paths which we share, but remember the cows are not looking for Drew's Station and will lead you a-muck. Pick a path going the way you want , and off you go to Drew's or a water tank.  Here's some GPS coordinates for both sites.  Both have an adobe wall which would have been the house and a few stone foundations of other building plus the wash.