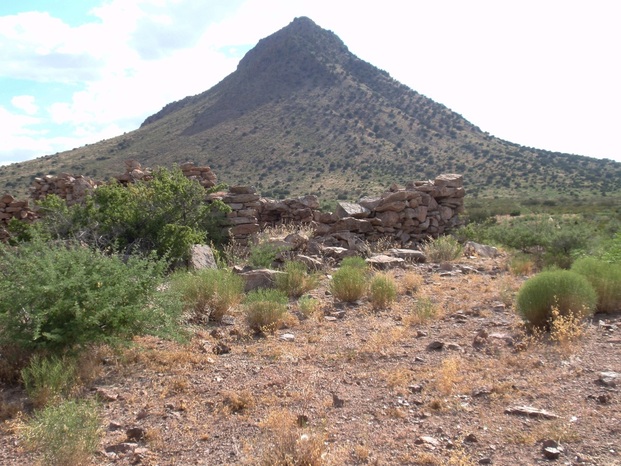 Ruins of Stage Station with Steins Peak in the background
The Apache Raiders (1850-1870's) made your    passage through this canyon 'DOUBTFUL!'

Steins Peak is the site of the ambush of the Giddings' Party by Cochise in April, 1861.


In late April, Giddings' party was ambushed 'just at dawn of day, as they were approaching the station at Steins Peak.'   Cochise and his Apaches killed nine men, but reserved the worst torture for those captured alive.


Mesilla Times  of May 11, 1861, reported what happened:  'Nine men are missing, and it is feared have all been massacred although there exists some hope that some of them may be retained as prisoners.  The Savages inflicted upon some of their victims a horrible torture, and exhibited a refinement in cruelty unparalleled in the catalogue of Indian barbarities.  From the expressman Mr. Price, we gather the following particulars:  A provision wagon left Tanks station on April 23, Edward Donnelly and Patrick Donaghue in charge, to put a load of flour at the San Cimone Station.  They started on their return but never reached the Tanks.  The next day two expressmen, Messrs. Paige and O' Brien left the Tanks westward bound and never reached the San Cimone Station and have not since been heard of.  On the 27th a coach left the Tanks for the West, in which were five persons Mr. J.J. Giddings, Superintendent of the San Antonio and San Diego Mail Company, Michael Nies (McNeese), Road Agent and Anthony Elder, Samuel Neely and Mr. Briggs, employees of the Overland Mail Company.  Two of the mules which left in the coach returned to the Tanks Station badly bruised, and have evidently been in a severe struggle.  The circumstance aroused the suspicion of all and our informant went the next day to Fort McLane and applied for an escort of troops to investigate the matter.  A Lieutenant and sixteen men were dispatched who on Monday near Steins Peak, met a train of W.S. Grant, Army Contractor, who gave them information of their having a fight with Cochise and his braves and confirmation of the fears that the coach had been captured by the Indians at or near Doubtful Pass [Grant's train had reached Stein's Peak about dark]....They found scattered along the ravine, newspapers and other mail matter, pieces of harness, etc.  The roof of the station (which was some time since abandoned) had been burned, the corral wall had been thrown down, and the Indians had formed a breastwork around the springs.  Near the station the bodies of two men were found, tied by the feet to trees, their heads reaching within eighteen inches of the ground, their arms extended and fastened to pickets, and the evidence of a slow fire under their heads.  The bodies had been pierced with arrows and lances.  They were so disfigured as to render recognition impossible.' 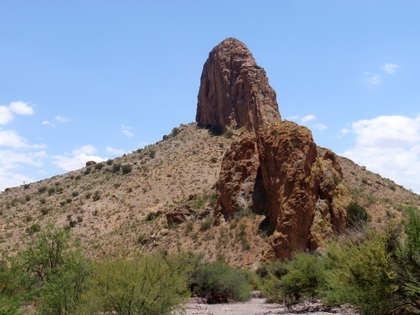 Rooster Comb
The names of the roads are different on the maps and the signs, so use mileage and G.P.S. coordinates.